For almost 3 years I worked the Pacuare River Rafting one day trip leaving from San Jose at 6am and arriving back to San Jose at 6pm. It was a very long day but still I have to say everyday you got up looking forward to the tour. It's just one of Costa Rica's best adventures that never gets old. 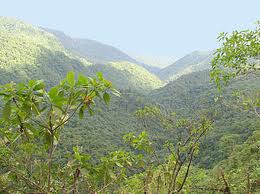 One of my favorite parts about this trip was after the long 3 hours of paddling was getting out of the raft and the peaceful drive back to San Jose. Most of the client were sleeping because they were tired from rafting also. They had to rest up for the rest of their Costa Rica Family Vacation and we had to rest up for the next day of rafting. The best part about the drive back was the 45 minutes we spend in the Braulio Carrillo National Park. I still remember hearing a man who had traveled all over the world visiting some of the worlds diverse and jungle filled places.
He made the comment that that the Braulio Carrillo always seemed to amaze him like none other. He said it was so unique in that it was so close to a major populated area as the San Jose Central Valley area. I did not think much at the time and then he went on to tell me how much of the park he would guess has never been set foot on by humans. Not thinking much of it at the time I began to do some research and realized that the Braulio Carrillo National Park is not friendly terrain. It is wet (4,500mm per year), very mountainous & rugged, and extremely tough to get around with many canyons, waterfalls, & rivers. There are a few hiking trails but the more you think about it the more that man probably was right in saying that there are many parts of it that man has never seen and it sits right next too a worlds major Capital City, San Jose (Sort of a major Capital City).

The park measures 47,583hectares and was created in 1978. It was named after the president who went through great lengths to join the Central Valley to the Atlantic Coast Braullio Carrillo.  Probably the most recognized area of the park are the volcanic peaks Barva, Cacho Negro, & Zurqui which can be seen from the now paved highway or the Rio Sucio which is two different color rivers (which was actually a scene from Jurassic Park & the movie Congo). Just a drive through the park on a clear day you will be promised a view of some of the most lush tropical forest you will see anywhere on Earth. The forest here is estimated to have around 6,000 different species of plants.

If you have the chance during your Costa Rica Family Vacation to visit the Braulio Carrillo National Park or atleast make the drive through our suggestion would be to try and do it early in the morning when the mist is rising. If you contact us and you really want to get a taste for the park we can take you hiking but it will not be your average touristy destination.

If you are headed from the Atlatic Coast or Pacuare River to the Arenal Volcano you will not pass the Braulio Carrillo Park although it might be worth to take a short detour if it is a clear day.